We’re gonna need to regroup from yesterday’s pain, so let’s jump into a film that’s been on my to-see list for a while now, shall we?

When you think of ‘80s horror, certain directors just keep coming up, like Wes Craven, Joe Dante, and Tobe Hooper, and John Carpenter often sits near the top of the power rankings. After helping define the slasher genre with Halloween, he brought us such classics as The Thing, Escape from New York, and They Live. He nearly capped the ‘80s off with a little picture called Prince of Darkness, and it was quite the effort. 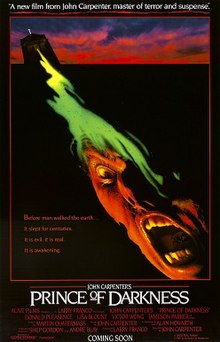 The plot is a relatively simple one, but it’s got some heavy themes and such. Upon the death of an elderly priest, a secret is discovered beneath a run-down church: a mysterious canister containing what looks to be a swirling green energy mass. The canister itself is heavily corroded, apparently locked somehow from the inside, and is surrounded by candles and crucifixes. An ancient tome, written in Latin and Coptic, provides the backstory. Another priest, having discovered all of this, enlists the aid of a group of scientists in order to translate the book and study the canister. Everything the scientists learn seems to contradict what they’ve been taught all their lives, particularly about the nature of the universe and the existence of Light and Darkness. But the canister and its contents aren’t wholly static during this investigation, as some unseen force exerts its will outward, taking control of a sizable homeless population outside of the church as well as an increasing an increasing number of the scientists. The End may truly be coming, and it’s not clear if humanity has a say in the matter.

Carpenter is at the top of his game here. He doesn’t clutter the story with a bunch of needless dialogue, and things progress and get revealed at a leisurely brisk pace and with the same sort of coming-into-the-middle-of-things feel that Big Trouble in Little China exhibited so well. This works to the overall narrative’s benefit, as it reinforces the fact that the forces we’re witnessing have been acting around us without our knowledge, and there’s no reason for changing it up now. Cinematographer Gary Kibbe’s shots are all great here, clean, clear, and with some subtly evocative use of shadows where appropriate. The HD transfer I watched is downright stunning, one of the few examples of Blu-Ray and the like actually enhancing the viewing experience for me over other formats.

Though characterization is kept to the basics as part of the overall in-over-our-heads-as-an-audience thing we’ve got going on, the acting is all pretty damn solid. Previous Carpenter collaborators – like Donald Pleasance (Halloween) and Dennis Dun and Victor Wong (Big Trouble in Little China) – rub shoulders with newcomers like Jameson Parker, Lisa Blount, Ann Yen, and even Alice Cooper, and everyone avails themselves of the situation well. The score, as usual handled by Carpenter hisself and frequent collaborator Alan Howarth, elicits just the right amount of dread and mystery for the events unfolding before us.

I’m actually a touch upset that it’s taken me so long to delve into this apparent gem. It’s not for everyone, but if the concept or my thoughts spurred any interest, Prince of Darkness is not likely to disappoint.