As mentioned last time, producer Tanaka Tomoyuki hated Godzilla vs Hedorah so much that he barred Banno Yoshimitsu from ever directing another Godzilla movie.  So, for the Big G’s next outing, he brought back Fukuda Jun and informed him of his rather limited budget (I dunno what it is, but I’m sensing a theme with these movies…).  What Fukuda was able to put together was Godzilla vs Gigan (AKA Godzilla on Monster Island in the States, because we just hate everything). 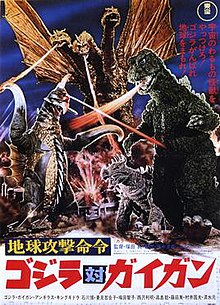 Our story follows a down-on-his-luck comic artist (okay, ya got me, manga artist) who lands a job at a kids’ theme park as a monster designer.  While there, he gets embroiled in a seemingly dark conspiracy surrounding the park.  What he (nor any of us, for that matter) could have suspected is that the park is a front for an invading force of cockroach aliens from the Space Hunter Nebula M.  I have no idea where that is, either, but I’m fairly certain it’s a ways away.  Anyway, Godzilla and Anguirus, hanging out on Monster Island, are summoned by a secret message on a tape smuggled out of the theme park.  In order to combat them, the aliens call upon a pair of extraterrestrial monsters, King Ghidorah and, brand new to the franchise, Gigan.  Insert battling amongst theme park attractions here.

Say what you will about Godzilla vs Hedorah, at least it had some imagination.  Here, things went as assembly line as possible.  With the budget so small, copious amounts of stock footage are employed (including, funnily enough, some shots from the detested previous film), often making little sense being included:  There’s one particularly egregious moment where it’s painfully obvious we’re watching a re-used scene due to the inclusion of a larval Mothra crawling around Godzilla’s feet.  Many times we see Gigan and Ghidorah flying about, but they’re very clearly just plastic models of the monsters barely made to look like they’re flying.  The shot of them circling the Godzilla-shaped tower is especially notorious, as nothing about it looks like we’re seeing any sort of realistic motion.  The wardrobe budget must have also been tiny, as most of the characters never change outfits, despite several days clearly passing.

For me, though, the most memorable aspects of the film are Gigan hisself and a strange occurrence with Godzilla and Anguirus.  Regarding the former, I’ve just always dug his design: he’s got a psittacine head (with a visor-lookin’ eye), hooks for hands, and some belly scales surrounding a belly buzzsaw.  You heard me right (I mean, you can see the poster above, right?).  He just seems so much cooler than the ways he’s been handled (we’ll see more of him next time, spoilers).  As for the former, get this:  As something of a call-back to the protagonist’s manga background, we see a conversation between Godzilla and his cohort via speech bubbles.  For the English dub, though, these were done away with, replaced with some strange human dialogue.  Their first vocal interaction is priceless:

Godzilla: “Hey, Angilla (one of the various ways Anguirus’ name has been anglicized over the years)!”

Anguirus: (as snarkily as possible) “What do you want?”

I have no idea why they opted for this communication method, I’m just glad it’s never done again in the future (spoilers).

As a whole, the film isn’t outright awful, but it’s slow to get going, the action suffers from the low budget and the stock footage, and there’s just a bunch of weird stuff here that doesn’t need to be here.  It’s the penultimate of the wacky entries, though, so we’ve only got one more in that category to go before things take a positive turn.  Stay tuned, kids.