Having seen several other outlets directly comparing these two films in their write-ups on each, I figured I’d follow suit and just tackle them together. I’m nothing if I’m not at least occasionally beholden to the whims of the crowd, y’know? What’s funnier is that, to me, the two don’t really have all that much in common. Don’t get me wrong, there’s the whole shared conceit of a maligned, disturbed loner seemingly being forced to act in a negative manner after suffering the slings and arrows of a society that has no place for them, but other than that the two are quite different in scope, tone, and execution.

Possibly the most hyped-up release in recent memory (aside from Endgame, ‘cause, c’mon, nothing’s gonna top a tentpole Disney release, amiright?), Joker was said to provide an already storied character with the appropriately-vaunted cinematic origin story he has so deserved all these years. And we certainly get something along those lines, as we watch young (I guess…more on that in a bit) Arthur as he suffers from an uncomfortable laughing condition and attempts to make it big as a stand-up comedian. He runs up against the wall of late-silver/early-bronze age Gotham City, replete with crime, corruption, and bad times for well-meaning folks like Arthur. As he’s pushed further and further by the darkness around him, he begins to increasingly resemble the Crown Prince of Crime that we all know and love today.

While not a complete mess by any stretch, I can’t say that I enjoyed Joker all that much. Joaquin Phoenix is a damned beast, and his lead performance helped keep me going during periods of doubt and boredom. Beyond him, though, there was little to outwardly like. I dug the fact that the world held a dingy, oppressive atmosphere, not unlike the New York that kept 42nd Street alive and kicking in its filthy prime, but it became a bit much, especially when it led to the sacrifice of rich or varied colors. (It ain’t Snyder’s Gotham, but it’s also far from Jenkins’ Themyscira.) The script, while not being nearly as bad as previous DC offerings, is still trite and copies handily from other films, like The King of Comedy. Everything is very on-the-nose, and motivations spring up suddenly, always with a just-so attitude.

What really hampers things, though, is the idea that the film was even necessary to begin with. I have no problem with providing Phoenix some prime steak ‘pon which to cut his teeth and ply his trade (people ply their trades on steaks, right?), but here it’s in the service of needlessly telling the story of how a villain came to be. In every prior incarnation of the character I’ve seen, the Joker’s either just shown up as-is, preformed somewhere in the primordial past, or he’s given a modicum of a backstory, usually involving him being a particularly loony gangster or criminal who rose through the ranks by dint of his madness, verve, and brutality. This lack of a wholly humanizing angle has helped keep the character mysterious, frightening, everything a top-class villain should be. Here, we see a guy who quite literally wanted to be a clown, only to have the world spit in his face, to which he responded by turning into a vicious, seemingly nihilistic madman. Sure. Can you see how this might water down his legend, even just a little bit?

Worse, I didn’t feel the film was all that convincing or compelling. Sure, Arthur was repeatedly dealt a rough hand, but his antagonists are all cardboard and hyperbolic, never feeling genuine, and his reaction, frankly, rings rather more short-sighted and immediate than fully understandable. I couldn’t find myself empathizing with Arthur for very long, ‘cause he’d just go and do something weird or violent and then go along his merry way. It’s not a constant deluge of darkness that turns him, but a punctuated series of itemized, well-spaced, regularly-paced steps. Shit, I’d rather remember him just wanting to be a criminal and letting his innate malevolence lead the way, even though that version of his origin is admittedly potentially less interesting and/or satisfying. Plus, there’s the whole question of just how old Arthur is supposed to be, given the time period and how we know things shake out in the DC Universe (I mean, were one to gauge it by Phoenix’s appearance, the Joker would be nearing retirement age when he takes on Batman in the coming decades), which took me out of things just that tiny bit more.

Credit where it’s due to writer/producer/director Todd Phillips, he did a decent-enough job in forging an atmospheric and heavy film, but it just plain didn’t work for me, especially when he gets on his “we live in a society”-style bullshit as he goes on. It’s an impressive move for the guy who showed us just how easy it was to drive an alright comedic idea into the ground with only three movies, but I can’t call it a complete success. 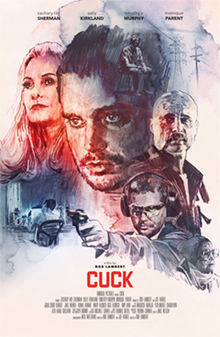 Cuck, on the other hand, kinda surprised me with how well it turned out and portrayed a similar story. Here, young Ronald (everybody calls him Ronnie, but I’m just gonna go ahead and call him Ronald, ‘cause I’m an asshole like that) finds himself in quite the bad emotional spot: The son of a late soldier, he can’t enlist in the army due to psychological issues; he lives under the thumb of his manipulative mother (trust me, the years we didn’t see are likely a much darker supervillain origin story than Joker could ever hope to be); he’s got a hard time finding and/or holding a job, what him thinking he’s above certain work and his inability to fully get along with certain others; he’s bad with women, thanks to both the heavy hand of his mother during his upbringing and a (likely consequently) negative view toward women; and he can’t help but notice just how well certain other people are doing, namely those of other races. Like many of his situation, he’s increasingly turning to the internet for bolstering, be it from right-wing nutjobs on YouTube (or, at least, the equivalent platform invented for the film) or from the ladies of good ol’ pornography. As he digs deeper into the rabbit hole, even starting up his own ranty channel extolling the virtues of the American Dream and condemning all those liberal “cucks” who’re ruining things for patriots like him, he gets involved with the online sex show produced by his comely neighbor. Little does he realize just how precarious his mental state truly is, and how far off the deep end he can go.

Immediately, I was struck by the humanity exhibited in Zachary Ray Sherman’s Ronald: As an avowed left-wing ninny myself (I think I’ve made many of my views clear in previous posts, so no gasps, kids), I expected to just look down my nose at the little bastard, but I often found myself actually feeling for the kid. We see that he is willing to try at life, even if he almost always turns his back in the end, and some of his breaks do indeed seem pretty rough. Although he’s clearly got something of a daddy complex and some mildly arrested development, the film shows that he is still the product of his own decisions, that his hole is deepened more by his reactive choices to his circumstances than the circumstances themselves. Sherman plays the part just as punchably as the character deserves, but he leaves enough naivete and pain in there to ensure that we never fully scoff him away. I assumed the right-wing loonery we’d see would be at least slightly on-the-nose and obvious, and it definitely is, but it’s given the context that allows it to feel natural, the result of Ronald’s conscious and unconscious choices, and his delivery of the classic talking points – we’re talking your antisemitism, your xenophobia, your homo- and transphobia, your uber-militaristic nationalism, those sorts of things – is natural enough to not come across like a polished talking head, but rather like a downtrodden loser who’s regurgitating them while clinging to their underlying philosophies in the hopes of staving off utter desolation. Even better, it’s clear the film thinks rather lowly of these ideas, unlike the relative ambivalence exhibited by Joker.

What really sold me on the narrative, though, is the way Ronald finally discovers just how low he can sink. He becomes infatuated with his neighbor, played by the always-engaging and -lovely Monique Parent, and sets out to woo her in his own bedraggled way. This leads to him joining in on her internet-based sexcapades, always as the put-upon guy who’s shown up by another, all while he’s tasked with masturbating to the scene before him. If you haven’t caught the hint yet, he’s playing the part of the cuckold. The cuck. Worse, he doesn’t even realize it, what with his delusions and the fact that he really only understands the term as a blanket insult, the way “idiot” and “dick” have lost their original meanings over the past decades’ use (I admit to dropping some hard Fs and Rs in my day in similar fashions, never intending to invoke the proper definitional implications of the words). When he finds out what it really means, and that he has been coerced into being one, you can see the twigs snap behind his eyes. It’s quite a shift, and credit goes to the filmmakers for employing this revelatory methodology, as it’s pretty effective.

So while Arthur’s descent isn’t quite as genuine-feeling as it could have been, Ronald’s reeks of real-world angst and sadness. You can tell he’s clutching to the only things that have made sense in his life, accentuating the vehement reactions against the seemingly opposing forces in the vain hope of maintaining his heroes’ status quo – and his own by association. At the end, you feel the mixed feelings you should: You shake your head not just because some asshat did some dastardly shit, but also because of the potential that was needlessly wasted. I never got that feeling whilst watching the Joker take his bows and dance about, but Ronnie brought out just the right amount of sympathy without forcing me to abandon my own beliefs.

While there are some issues with Cuck, like some overactive editing and a fairly dime-sized narrative turning point, I can’t help but warm to it. If you really wanna see a mind descend into the depths and take on its perceived transgressors with hatred and violence, do yourself a favor and opt for Cuck, it’s got a better heart and a stronger head on its shoulders. If you need to budget and the polish, Joker isn’t truly bad, so you aren’t likely to make too big a mistake here.